The Eduladder is a community of students, teachers, and programmers. We help you to solve your academic and programming questions fast. In eduladder you can Ask,Answer,Listen,Earn and Download Questions and Question papers.Watch related videos of your favorite subject. Connect with students from different parts of the world. Apply or Post Jobs, Courses ,Internships and Volunteering opportunity. For FREE
See Our team
Wondering how we keep quality?
Got unsolved questions? Ask Questions
GATE GMAT CBSE NCERT Career Interview Railway UPSC NID NIFT-UG NIFT-PG PHP AJAX JavaScript Node Js Shell Script Research
UNIX-SYSTEMS-PROGRAMMING-AND-COMPILER-DESIGN-LABORATORY-10CSL68--->View question

It is related to system programming and compiler construction.


Asked On2017-12-19 15:49:41 by:leoTaged users:Meghnavinay-s-m-gowdaLikes:Be first to like this questionDislikes:Be first to dislike this questionTalk about this  Like  Dislike
View all questions Download question set
Answers
Systems Software consists of a set of programs that support. The operation of a computer system and help, the programmer, to simplify the programming process and run application software efficiently.
1. Translator
-A Translator is a system program that converts a program in one language to a program in another language.
-A Translator can be denoted by following symbol:
STTB
Where S = Source Language
T = Target Language
B = Base Language in which the translator is written

3.Cross Assembler
-A Cross-Assembler runs on one machine, but assembles ALP of another machine and generates machine code for that machine.
-Imagine an ALP program (the actual assembler) running on a Windows machine. It takes as input some 8086 ALP program and generates its machine code for 8086 machine. But the main assembler still runs on Windows machine, even though source and target languages are of a backward processor 8086. Example: TASM programs running. 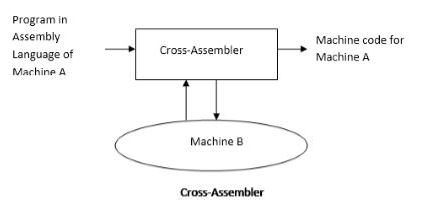 4.Disassembler
As the name suggests, it converts machine code of a particular machine back to its assembly language. (Recall: reverse engineering).
This idea of reverse engineering is used to recover some lost source code file using its object file.
5.Compiler
A Compiler is a language translator that takes as input a source program in some HLL and converts it into a lower-level language (i.e. machine or assembly language).
So, an HLL program is first compiled to generate an object file with machine-level instructions (i.e. compile time) and then instructions in object file are executed (ex: run time).

6.Cross-Compiler
A Cross-Compiler runs on one machine, but generates machine or assembly code for another machine.

7.Decompiler
-Similar to Disassembler for Assembly Language, a Decompiler traces back the machine or assembly code and converts it into source HLL program.
-This reverse conversion is strictly dependent on how much information about source HLL is present in the machine code (or assembly code).
8.Interpreters
-An Interpreter is similar to a compiler, but one big difference is that it executes each line of source code as soon as its equivalent machine code is generated. (This approach is different from a compiler, which compiles the entire source code into an object file that is executed separately).
-If there are any errors during interpretation, they are notified immediately to the programmer and remaining source code lines are not processed.
-In case of a Compiler, all errors occurred during compile-time are notified collectively to the programmer; the programmer then corrects the errors and re-compiles and executes the code.
-The main advantage with Interpreters is that, since it immediately notifies an error to the programmer, debugging becomes a lot easier.
9.Pre-processors
-A Pre-processor converts one HLL into another HLL.
-Typically pre-processors are seen as system software used to perform some additional functions (such as removal of white spaces and comments) before the actual translation process can begin.
-So, input and output of pre-processor is generally the same HLL, only some additional functions have been performed on the source.
-A Macro Processor is an example of pre-processor.
10.Macro Processor
-A Macro is defined as a single-line abbreviation of a small sequence of statements.
-A Macro Processor expands the macro calls and removes macro definitions from an as input source code, which contains these macro definitions and calls.
-Macros are used similar to functions, but they are much smaller (and less complex) than functions.
11.Linker
-A Linker (or a Linkage Editor) takes the object file, loads and compiles the external sub-routines from the library and resolves their external references in the main-program.
-A Compiler generates an object file after compiling the source code. But this object file cannot be executed immediately after it gets generated.
-This is because the main program may use separate subroutines in its code (locally defined in the program or available globally as language subroutines). The external sub-routines have not been compiled with the main program and therefore their addresses are not known in the program. 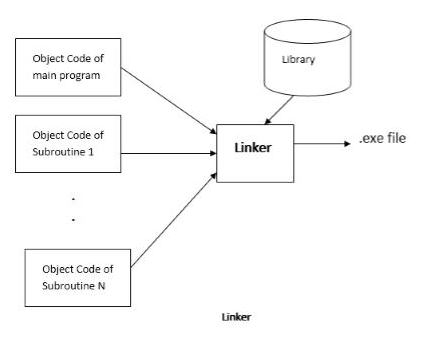 Answerd on:2018-06-06 Answerd By:aksingh1818Likes:|aksingh1818Dislikes:Be first to dislike this answerTalk about this  Like  Dislike